Whether you’re thinking about switching to PTO or just want to check that your existing approach has got everything covered, we hope you’ll find our free guide to creating a Paid Time Off policy useful.

The guide tells you everything you need to know to set up a fair, clear Paid Time Off policy.

We cover what PTO actually means, how many days to give, different methods of earning PTO, “use it or lose it” clauses, the best ways to manage PTO, and much more.

The guide is completely free and available to read in full below.

This guide is brought to you by Bindle – the best way for your company to manage PTO.

Bindle solves the four big problems you hit when you try to manage Paid Time Off using only email and spreadsheets. 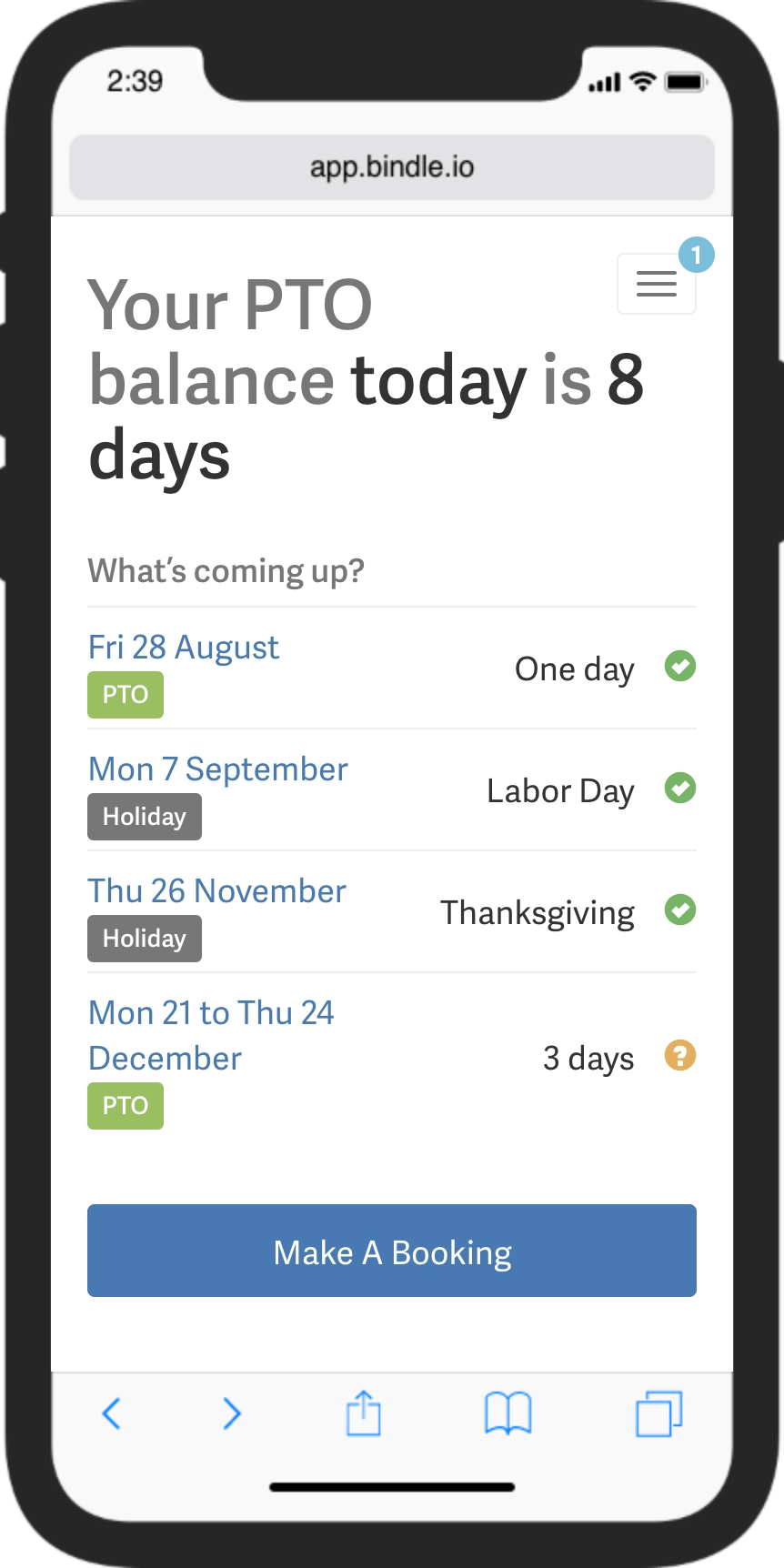 1
PTO Defined
2
Alternatives to PTO
3
Elements of a PTO Policy
3.1
Methods of earning PTO
3.2
When should the PTO year start?
3.3
How much PTO should you give?
3.4
“Use it or lose it” clauses
3.5
Termination payments
4
Creating a written PTO Policy
5
Managing PTO

So what exactly is the PTO (or Paid Time Off) approach to staff time off?

Sometimes known as a “PTO bank”, the fundamental idea is that staff have a single allocation or “bank” of paid time off, and that this allocation is used for all the different reasons that they need to take time off work. Whether the time off is for vacation, sickness, or any other reason, it all comes out of one allowance.

Why do this? From the company point of view, administration becomes simpler. From the employee’s perspective there is increased flexibility.

Although the PTO approach is very flexible, a possible downside for staff is that a single allocation can make it harder to keep time off available to cover illness. This could lead people to feel forced to work while sick, or to take blocks of unpaid time off.

Similar issues exist for other things that can happen without much notice, like bereavement and jury duty. If you do choose the PTO approach, it’s worth considering having an additional category of time off to cover unforeseen events.

Additional background information can be found on Wikipedia.

Before deciding on the PTO approach, it’s worth considering the two main alternatives.

Traditionally, staff have been given separate allocations of time off for vacation, sick leave, and personal days.

These traditional policies are still the most popular, particularly with larger companies. They are less flexible for staff, but have the advantage of not relying on staff budgeting time for unforeseen illness.

Unlimited time off policies are a relatively new thing. The big idea here is that if staff are responsible for performing their work and delivering in good time, why not also make them responsible for managing their time off?

Contrary to what you might expect, evidence suggests that staff in workplaces which offer unlimited time off actually take less time off. This is often attributed to company cultures which are strongly focussed on work.

Unlimited time off policies are popular with technology companies.

Once you’ve decided that the PTO approach suits your company and staff best, there are five main things to consider as you create your PTO Policy.

The following sections take each of these five elements in turn. They outline the choices available to you and the factors that should influence your decision.

The two main methods of earning PTO are to either grant your staff a lump sum once per year, or for them to gradually accrue smaller amounts throughout the year.

Using the Annual Lump Sum approach, once each year everyone in the company is granted their full allocation of PTO for the upcoming year.

Annual lump sum is generally considered the easiest way for managers and employees to think about time off balances: each person get a number of days and over the course of the year they use them up.

A disadvantage of this method is that in some states, like California and Massachusetts, PTO time that has been awarded is legally considered to be earned. In the event of termination remaining balances must be paid out. It’s worth reviewing the rules that are applicable in your state.

The other main way for staff to earn PTO is to accrue time off gradually throughout the year. Typically time off is accrued on a daily basis and calculated per pay period.

Using this approach, staff need to work for a certain length of time before they’re entitled to take Paid Time Off. Some companies, however, allow staff to take time off in advance and for their PTO balance to go ‘into the red’.

Your leave policy should be clear about what you do and do not allow. Note that some states do not allow you to include a deduction for outstanding negative PTO balances from a staff member’s final pay check.

From an accounting perspective, a positive benefit of the gradual accrual approach is that your business gradually acquires the paid time off liability throughout the year.

While balance calculations using the gradual accrual approach are more complicated, most tracking applications - including Bindle - make this straightforward.

3.2 When should the PTO year start?

The next thing to consider when creating your PTO policy is when to start your PTO year.

The two main options are to either start the PTO year at the beginning of the calendar year for everyone in the company, or for each employee’s PTO year to start on the anniversary of their employment start date.

If you use the start of the calendar year, everyone’s balance is calculated on the same basis. It’s easy to see at a glance if anyone is building up a lot of unused time off.

However, if you have a “use it or lose it” policy you may potentially end up with many people scrambling to use their PTO before the end of the year, which for many businesses is a busy time.

Additionally, using this approach, you’ll need to calculate a pro-rata opening balance for new employees who start part way though the year.

If you use anniversary of employment date as the start of the PTO year, it’s harder to interpret people’s balances at a glance, as everyone is on a different schedule.

You don’t however have to worry about pro-rata balances for new employees in their first year.

Another advantage of this approach is if you have a policy of giving progressively more time off to longer serving staff, the years of service tier they fall into will correlate exactly with the accrual period, making it easier to calculate their PTO allowance.

We’ve helped a lot of companies get their PTO systems up and running on Bindle.

We’ve got a lot of experience and we’d love to put it to work for you.

How do you get started? Either book a call or send us a mail. 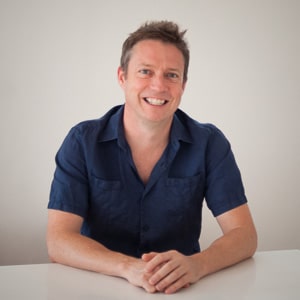 We’d love to hear from you

If you’re unsure of how much PTO to offer your staff, you might like to look at some nation-wide averages.

For companies that award a fixed amount of PTO to all staff, the average allocation is 18 days per year (plus the 10 federal holidays).

However, around 90% of companies increase the amount of PTO they offer staff based on years of service. This is a great way to encourage employee retention.

Staff members receive the following number of days per year on average:

To arrive at your final answer, you should also consider factors like how competitive your industry is for finding and retaining talent.

All figures from SHRM.

To limit the total amount of paid time off your business has to pay out, you might consider putting a “use it or lose it” clause in place.

With such a clause in place, staff forfeit any unused leave at the end of each year.

Alternatively, you might allow a limited number of days to be carried over into the next year.

Although at first glance these policies don’t appear very favourable to staff, both approaches can have the positive effect of encouraging staff to actually use their allocated time off.

Be aware that states such as California and Massachusetts consider paid time off to be equivalent to wages earned by the employee. They therefore do not recognize “use it or lose it” clauses.

California does allow employers to set maximum amounts of time off that staff can accrue. For example, you might set the accrual cap to 1.5 times the annual accrual rate of say 18 days per year, giving a maximum PTO balance of 27 days.

Your policy should include either a maximum balance cap or a carry over limit. If your employees are granted PTO as an annual lump sum, both approaches have a very similar effect.

Where leave is granted as a daily accrual, maximum balance caps can be easier to understand than carry over limits.

In some states, paying out PTO balances upon termination of employment may be left to your discretion.

Other states like California require you to pay out PTO balances when an employee leaves.

We recommend that you check the relevant state governments’ websites and find out the rules that apply to you and your staff.

Note that for remote staff, the relevant state is the state in which the staff member is located.

Your policy for payout upon termination should be compliant for all states in which your employees are located. To avoid confusion, the policy should ideally be consistent for all staff across your company.

A clear written PTO policy helps protect both your company and staff.

Bindle has created a PTO policy generator that makes the process of creating a custom PTO Policy really simple.

All you need to do is answer a few quick questions about how you handle PTO (all of which we’ve covered in this guide) and we’ll generate a PTO policy and mail it to you for free.

There are two main approaches to managing PTO: create your own custom solution based on email and spreadsheets or sign up for a dedicated tool that does it all for you.

While making your own solution might appear to be a way to save money, the true cost of this approach is in the time it takes, firstly to set things up and then to keep everything running smoothly.

You will pay a small amount each month for a dedicated tool, but it will save you so much time that it pays for itself.

Before you reach for Excel, we recommend you investigate dedicated tools, including Bindle.

We identified four big problems with using email and spreadsheets to manage PTO and created Bindle to solve them.

#1
People don’t know who’s off next week.
#2
Someone gets pestered with PTO balance requests.
#3
Approval decisions are buried in messy email trails.
#4
The spreadsheet you update may have hard to find errors.
Find Out More
No credit card required. 30 days free. 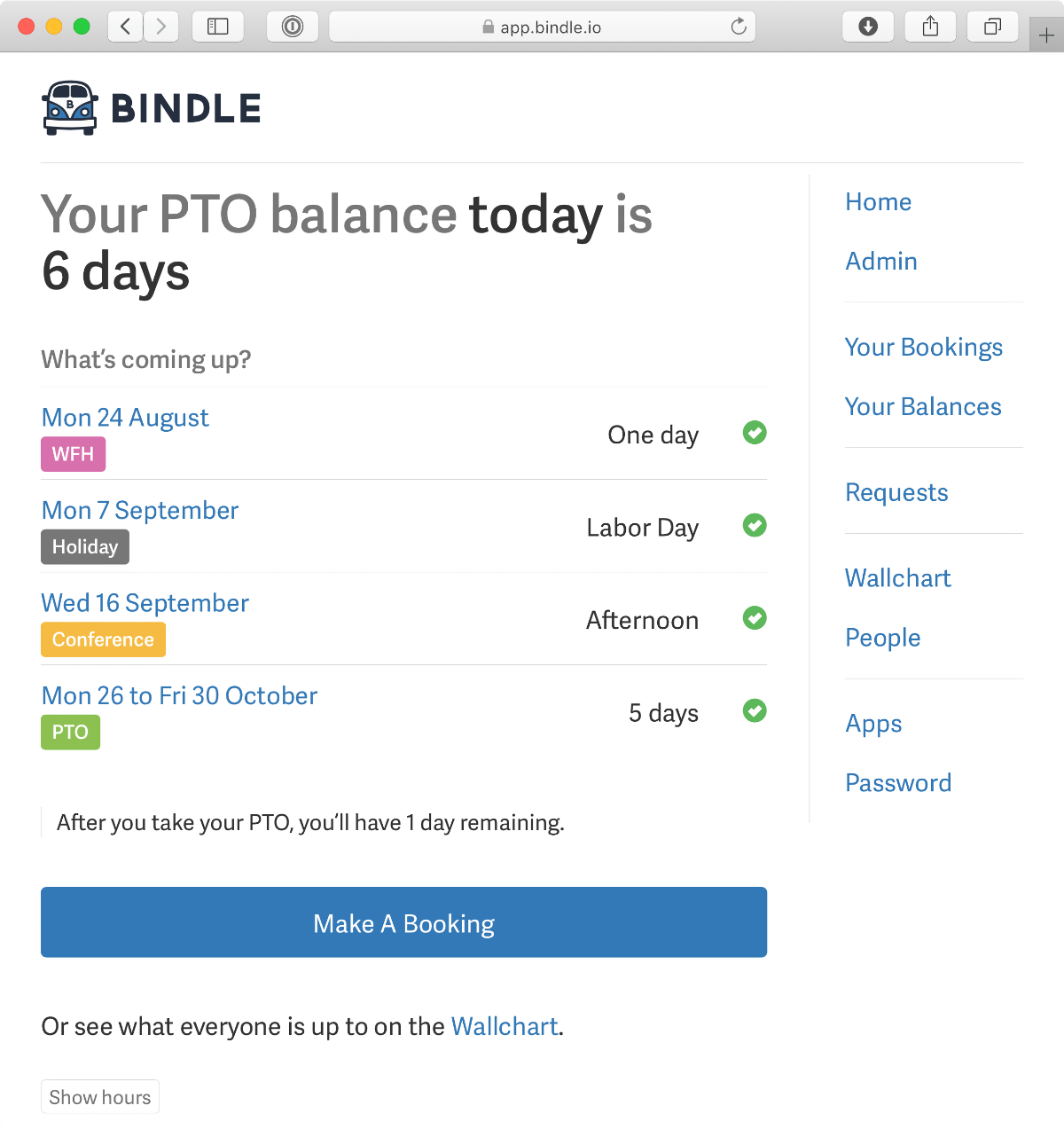 This tool has been fantastic! The customer support I have received from the Bindle team is quick and very helpful.

We are very happy with Bindle PTO tracking! Huge time saver, we were able to get off a paper based, manual system. Employees love it.

Easy to set up and crucially does not need an instruction manual or training when I share with others in the team.